A lack of trust, rising fossil fuel prices and restrictive regulation are threatening to undermine the big six energy companies 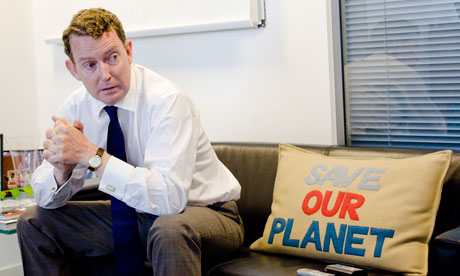 Energy minister, Greg Barker, has called for “the big Six to become the big 60,000” to create a “greener, more local energy sector”. Photograph: Martin Argles for the Guardian

The giant utility companies that provide our power are central to the economy and for decades their business model worked pretty well for them.

But utilities around the world are facing an unprecedented range of challenges as nations seek to decarbonise their economies. Customers are paying more for their electricity while the generators are earning less, there is a need for massive investment in new power plants and power lines as ageing nuclear and coal plants come offline and rock-bottom carbon prices encourage the use of more polluting coal instead of cleaner gas. There’s an increased focus on energy efficiency and a lot more distributed generation coming onto the grid.

Jeremy Leggett, chairman of solar energy group Solarcentury and the Carbon Tracker Initiative, says the challenge is stark because the sector has lost the trust of customers. “The big six [the main power generators] are arguably the most hated companies in Britain. The very viability of their current business model is in danger,” he says. “Their current fragile profitability is going to be shot to pieces in the years ahead by a deadly marriage of rising fossil fuel prices and new regulatory constraints that will be rooted in the extent to which they are hated.”

Part of the problem is that they are simply not making as much money as they did in the past. Annett Urbaczka, head of group press relations at RWE, the German utility, says that the euro crisis has depressed demand for power from industrial groups throughout Europe, cutting the average price from €50/MWh (£42/MWh) to €38/MWh (£32/MWh).

In addition, German utility companies such as RWE and E.ON, which also have operations in the UK, are seeing their margins hollowed out in Europe’s biggest economy by the increasing amount of renewable energy capacity on the grid. Previously, utilities could expect a price peak around noon that benefited fast-reacting medium-load, mainly gas-fired power plants, Urbaczka says. “But now more than 30GW of solar capacity is ready to produce power at noon. Renewable energy has priority access to the grid and conventional power plants have to adjust their production accordingly.”

On days that are both sunny and windy, allowing both wind and solar generators to produce power, this can mean electricity generators having to pay their customers to take their surplus power. The size of Germany’s power market and the fact that Europe still lacks a truly integrated single energy market means that this excess German renewables capacity is playing havoc with its neighbours’ grid systems as well.

As a result, the average usage of the gas-fired plants has fallen significantly – for example, RWE’s three units at Lingen in north-western Germany produced more than 4,000GWh in 2011, while in the first half of 2013 they produced only 700GWh. “In the long term such capacity utilisation is not enough for them to be viable so we are forced to review our capacity regularly and – in the worst case – to mothball plants,” Urbaczka adds. RWE announced earlier this year that it would take offline about 3,100MW of capacity in Germany and the Netherlands.

Yet plunging wholesale prices are not translating into cheaper retail prices for German domestic customers because they are being asked to pay for renewable energy subsidies, while industrial users enjoy cheaper power prices. Meanwhile, European Union rules are leading to the unbundling of transmission networks, depriving utilities of another source of revenue, says Colin Campbell, head of the Renewable Infrastructure team at Zouk Capital. “It was regulated, boring, reliable and underpinned many utilities. They are losing a stable platform.” Moves to improve energy efficiency and the advent of energy storage will further cut demand for electricity over time, he adds.

At the same time, the roll-out of renewable energy capacity is bringing new players into the market. Investment funds such as Foresight and Greencoat Capital have recently listed on the London Stock Exchange to raise money to invest in solar and wind assets, while a number of pension funds are finding that the long-term nature of power purchase agreements and support payments, along with the above average returns, make renewable assets an increasingly attractive investment. “We are likely to see the big infrastructure funds and pension funds owning a lot more generation assets in future,” says Bertie Readhead, senior analyst at Jones Lang LaSalle.

The falling cost of renewable energy technologies, in particular solar, also creates an existential threat for the utilities as more and more householders partially or wholly opt out of the power system by generating their own energy. The Edison Electric Institute, a trade body for US power groups, warned in a report earlier this year that the growth of distributed generation leaves the power companies in the same position as airlines and telephone companies were in the late 1970s.

Deregulation transformed the airline sector while telecoms experienced a technological revolution. As a result, “in the airline sector, each of the major US carriers that were in existence prior to deregulation in 1978 faced bankruptcy,” the EEI says. “The telecommunication businesses of 1978, meanwhile, are not recognisable today, nor are the names of many of the players and the service they once provided.”

And back home, energy minister Greg Barker has called for “the big Six to become the big 60,000” to create a “greener, more local energy sector”.

Utilities are facing regulatory, political and technological challenges – and if they fail to embrace them, they will struggle to survive. Their route to survival, says Leggett, “is early embrace of this coming paradigm shift, ahead of their core competitors: the kind of shift in business model that goes beyond the steps IBM eventually took in order to survive and ultimately prosper in the wake of the microcomputer.”

Yet large utility companies will still be central to the market in years to come, says Angela Knight, chief executive of Energy UK, the sector’s trade association. “We are likely to see more smaller companies coming into the market, while there will also be more external financing and there are significant opportunities for local community schemes,” she says. “Exactly how the sector will look in years to come, though, is hard to say. We are in a situation that is not only very complex but also very fluid.”

This entry was posted in National and International Media, Publications, The Guardian. Bookmark the permalink.
Tweet
← Cities bypass slow government to lead the way on climate change
Chinese beef. Opening the dragon’s appetite →