Smart meters will help electric vehicles move into the mainstream

Electric vehicles have so far made slow progress on their journey to the automotive mainstream, but they are about to accelerate into the spotlight.

The next set of European Union targets for electric vehicles (EVs) are set to come into force in 2020, and carmakers are unveiling a slew of new electric models as a result. “At the moment, EV sales make up an average of about 2% of new cars but we expect that to change next year,” says Peter Mock, Managing Director, Europe at the International Council on Clean Transportation (ICCT).

With some of the world’s largest carmakers, such as VW, BMW, Daimler and Renault committing significant resources into the electric mobility revolution, “we will see a lot more EV models on the market by the end of this year.”

There is a rush to install enough charging infrastructure on streets, in workplaces and in other locations such as supermarkets and leisure centres, so that drivers can recharge their vehicles when they want to.

However, many people will choose to charge their vehicles at home. For them to be able to do this without bringing the electricity network crashing down will require every home to have a smart meter.

The European Union “aims to replace at least 80% of electricity meters with smart meters by 2020 wherever it is cost-effective to do so,” according to the European Commission. “This smart metering and smart grids rollout can reduce emissions in the EU by up to 9% and annual household energy consumption by similar amounts.”

The smart meter sits between the electricity network and the customer, says Nico Arcauz, Head of Smart Grids at Spanish electricity group Iberdrola. It differs from traditional meters because it allows a two-way communication between the consumer and the supplier.

Smart meters will provide reams of new data that will enable electricity networks and retailers to offer consumers a whole new set of services including time of use tariffs that will play a vital role in balancing networks as well as enabling drivers to charge their cars as cheaply as possible. “Retailers and energy services companies put value to the data that is collected by the distribution companies,” says Alicia Carrasco, CEO of olivoENERGY, a consultancy that specialises in the EU energy transition process.

“This will support energy management for the whole electricity system and individual consumers, who will be better able to react to price signals, for example in deciding whether to charge their cars or not. Thanks to smart meters, the consumer becomes an integral part of the energy system, through measures such as demand response, solar power and EVs. These services are just starting to emerge now.” 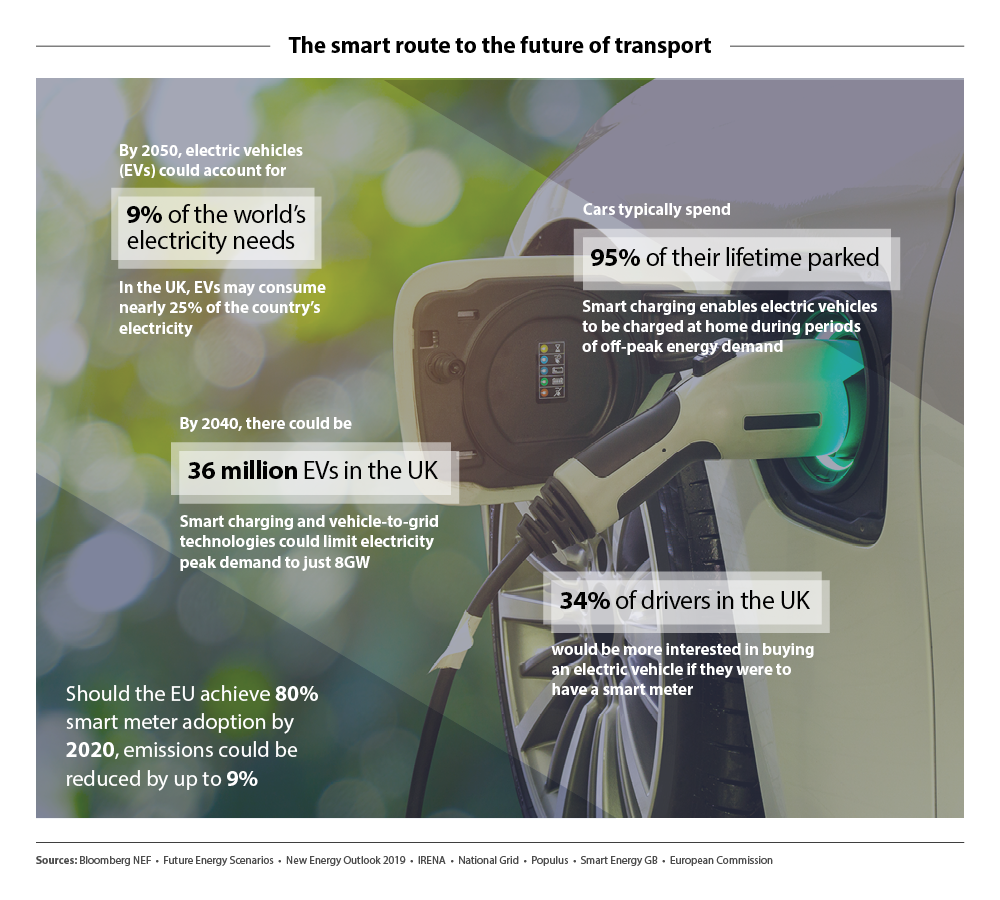 More and more renewables are coming onto the grid, and that creates opportunities. We need to match energy generation with demand, adds Iberdrola’s Arcauz. “EVs can play an important role in soaking up surplus demand, or they can switch off when demand is high.”

Smart meters could also allow vehicles to feed power back into the grid when demand surges and charge vehicles during cheaper off-peak periods; a process known as vehicle-to-grid (V2G). This flexible power system gives consumers the opportunity to take control of their energy usage and potentially significantly reduce their monthly bills. “When I see an electric vehicle, I see a battery on wheels. With enough EV penetration, fully charged EVs connected to the network can serve customers with power stored in their batteries to reduce the impact of any power outage to the minimum. The potential for EVs as a new Distributed Energy Resource (DER) is enormous”, Arcauz says.

However, while V2G looks promising from the network point of view, it’s not clear that car owners will be so keen. “I am sceptical,” says Peter Mock from ICCT. “The downside of charging and discharging batteries all the time is that it runs them down more quickly, which outweighs the advantage of selling the power. Stopping cars charging at peak time would work, though, if prices can be structured in such a way to encourage consumers to change their behaviour.”

In the UK, some 12 million smart meters have been installed, out of a 2020 target for 50 million, although consumers are not obliged to install them. Spain is several years ahead, having introduced a mandate in 2010 that all meters should be smart by the end of 2018. This deadline was met, with deployment costing 40% less than the EU average, according to KPMG.

“The campaign was a success because there was a very clearly defined roadmap on how protocols would develop,” Carrasco adds. The regulator set out clear milestones and specified the technical and functional characteristics with which the meters should comply.

The distribution system operators, which were responsible for delivering the deployment, were determined to meet the deadline but Iberdrola also took the opportunity to upgrade and digitise their network and as a result, the quality of electricity supplies has improved.

Iberdrola has recently invested in EV charging company Wallbox, who provide customer solutions and promote the integration of EVs into smart grids, including V2G and smart charging. Arcauz concludes, “We see ourselves as facilitators of a carbon-free future. Over the last 10 years, we have invested some €2 billion in the digitisation of the network in Spain and we are confident that the network is ready to cope with increased demand.”

This entry was posted in Corporate, Iberdrola and tagged #smartmeters. Bookmark the permalink.
Tweet
← Heineken shows its bottle on climate
The global race to put a credible price on carbon →